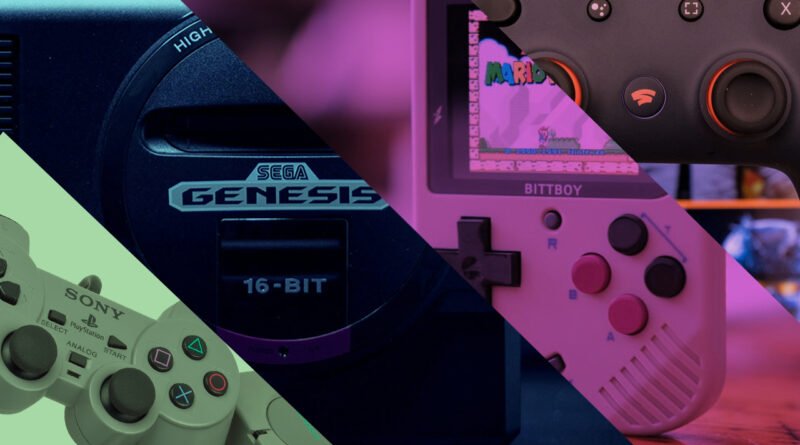 Gaming consoles have been a part of the popular culture for over 50 years now. Now, with the release of the Sony Playstation 5 and Xbox Series X, we are officially in the 9th generation of gaming consoles. Along the way however, a few consoles have stood out amongst the others, to reshape the path for modern gaming. Some consoles stood out for their ground breaking hardware, others, becoming cultural symbols of the era. This is The list of the top 10 most important game consoles, that changed the landscape of gaming and are still having an impact today. Leave your thoughts, comments, and your opinions down below in the comments. Enjoy!

If you haven’t heard of the “New Bittboy”, it was released in 2019, as a revision to it’s original incarnation aptly titled, “the Bittboy”. In appearance, it’s simply a bite sized, Gameboy DMG clone, only available for purchase online, direct from China. However, more importantly, it’s a chameleon of a system that doesn’t actually have any native games. The Bittboy’s function is to emulate the games of other consoles. The standard cartridge slot is replaced by a micro SD card slot, on which, games are stored as ROM files (the digital representation of a physical game cartridges). Dozens of retro consoles, and thousands of their game libraries can fit onto a single SD card. Aside from the ethical questions of emulation, the release of the “New Bittboy” sparked a new retro gaming Renaissance. A tidal wave of very affordable, very pocketable, and increasingly very well manufactured, emulation consoles began to take the internet by storm. Gamers are now able to carry 50 years of gaming history in their pockets on consoles dedicated to emulation. With emulation hardware and software improving by the day, the clock is ticking until these, “retro consoles” will be able to play the games of current generation consoles.

As much as it may pain gaming traditionalists to admit it, it’s likely that Google Stadia was the first incarnation of what may eventually become the next evolution of gaming, and end of the game console as we know it. Google Stadia is a game streaming service, akin to movie streaming platforms such as Netflix, or Hulu. The difference is, of course, is it streams games. The only 1st party hardware needed, is the proprietary controller. Although the Stadia was released with underwhelming reception due to issues with slow network speeds and connection problems, the fact is, it seems the current progression towards cloud gaming is unstoppable. With a modern console’s game size, creeping into the HUNDREDS of gigabytes, and the widespread move to 5g, the clock is ticking for physical media. As Netflix was the nail in the coffin of the DVD, the Stadia or a Stadia-like service, could likely be the end of the game console. Whether Google, Apple, Sony, Microsoft, Nvidia or another company carries the ball into the future is yet to be seen. But it’s undeniable, Pandora’s box is wide open.

By the late 1980’s, Nintendo was an unstoppable force, and had completely obliterated it’s competition in the global gaming marketplace. Nintendo’s 8bit Goliath (the Nintendo Entertainment System/ Famicom) was poised to continue it’s domination into the forseeable future. That is, until the “Great Console War” began officially on September 15th 1989, as Sega released it’s flagship 16 bit console, the Genesis (Megadrive). The Genesis/Mega drive, with it’s signature raw pixel graphics, buzz saw audio and sleek black aesthetics, became the scrappy, gaming antitheses to Nintendo’s polished and family friendly image. Adult targeted titles like, Mortal Kombat (with a blood code), Splatterhouse and Night Trap for the Sega CD, became controversial lightning rods that created a firestorm in the national culture, and incited congressional hearings to create the Entertainment Software Rating Board (ESRB), and ultimately propelled Sega to tear into Nintendo’s seemingly impenetrable sales firewall. The Genesis single handedly opened the floodgates for other competitors such as Sony and Microsoft to enter the gaming arena.

If the playstation 1 was Sony knocking on the door of modern gaming, The playstation 2 was Sony kicking it straight off the hinges. The Playstation 2 remains in a gray area between the last “retro” game console and the first “modern” console. For sure, the PS2 era represents a time when games turned the corner from abstract renditions in pixel art, into photo-realistic and cinematic compositions. Released in March of 2000, the PS2 holds the title of the “best selling video game console of all time”, ultimately moving 155 million units worldwide. Supported by an unparalleled number of games, backwards compatibility with the also comparably large Playstation 1 collection, and built in DVD player functionality, the PS2 took the world by storm in 2000 and cemented Sony as a player in the gaming market.

The SNES, released in 1991 took everything that made the the original NES great, and improved it. The result was one of the most iconic consoles of all time, that represents the aesthetic pinnacle of retro gaming. The SNES pushed the boundaries of visuals and sound for the era. Super Castlevania IV, Super Mario World, Super Metroid, Donkey Kong Country are visual works of art, showcasing the console’s gorgeous 256 color pallete, symphonic sound, and Mode-7 graphics scaling.

Sony originally partnered with Nintendo to create a CD add-on for the SNES to compete against SEGA’s introduction of the Sega CD. However, after a falling out between the 2 companies, Sony released the Playstation as it’s own product in 1994. The result was Sony leading gaming into the 21st century and introduced Sony as a strong contender for the gaming title. Big 3rd party franchises were created from the playstation including Resident Evil, Silent hill, Tomb Raider, Grand Theft Auto, Tony Hawk Skateboarding, etc.

Before kids walked around, heads buried in a cell phone or tablet, enjoying their Dynamic AMOLED screens, touch controls and 5g connectivity, the kids of the 80’s and 90’s were contorting their necks to catch the perfect angle of light that would show all 4 glorious shades of the pea-soup green of the Nintendo Game Boy’s 2 inch screen. However, as horribly as the original DMG’s display has aged over the past decades, it’s undeniable, that the fluid, portable NES caliber gameplay, of which it displayed, was no less than a technological marvel of the times. Carrying a NES quality game console in your pocket was revolutionary, and like the Sony Walkman, became a precursor to what would be a become handheld devices completely changing society

The first true gaming cultural explosion came at the hands of Atari with the VCS/2600 released in 1977. Being the first console to offer interchangeable games, sell licensed arcade hits such as Space invaders, Pac Man, Missle Command, and showcase multi-colored graphics, the Arari 2600 sold 10 million consoles in 1980 and currently has sold over 30 million consoles. More noteably, the Atari 2600 is also responsible for the nearly catastrophic video game crash of the early 80’s where the gaming nearly irrecoverably collapsed at the hands of Atari’s E.T. The Extra Terrestrial, commonly cited as the worst game in history. By the end of1983, Atari lost 536 million dollars, and the gaming industry was critically wounded. That is, until one company entered the game (See console #1).

In 1966, Ralph H baer. The father of the original home video game console had a vision; for people to play video games on their Television. Pre-dating Atari’s Pong, The Oddysey was released in 1972. The console was crude in it’s technology, powered by only transistors, resistors and capacitors to create single white squares on the TV screen. The System was sold with plastic overlays that would be put over the TV screen to create an illusion of graphics and color.

The NES was the Phoenix that rose from the ashes of the video game crash of 1983. Undeniably iconic, it revolutionized the game industry with it’s revolutionary8-bit technology, colorful graphics, 5 channel sound chip, and an innovative controller. It defined a generation of children, . Calling the interest that was generated by the NES era as an “obsession” is an understatement. There were Nintendo breakfast cereals, Saturday morning cartoons, clothes, birthday party stationary, you name it, Nintendo was selling it.

The RG350m (the “m” standing for “metal”) is the 2nd iteration in Anbernic’s RG350 lineup. The metal version showcases: An

How to Travel to Australian Forest

Over 100 animals seized from farm

We love Old School games and we are here to provide you with professional looking WordPress themes so that you can take your website one step ahead. We focus on simplicity, elegant design and clean code.

Contains all features of free version and many new additional features.